You are here: Home / Basketball / Featured / The Art of the Quadruple-Double Part 2: Who in today’s NBA can reach the feat?

The quadruple-double is like that diamond in the rough–rare in existence but it’s not a fairy tale feat that we will never see again. We flipped through the pages of NBA history to take a look at the four players who are already in the exclusive club in Part 1 of this series. We will hop in the DeLorean once again and this time take an educated guess at the candidates from today’s NBA who could also reach the feat.

So many factors come into play when assessing who can achieve a quadruple-double. Minutes played, pace at which a team plays, opponent and closeness of a game are just some of the infinite factors that can be taken into account when making assessments. A player would have to have an extraordinary game in steals or blocks while sacrificing something he usually does best just enough to still reach double-digits in the corresponding categories.

The factors are really too numerous to mention. Nevertheless, here is short list of players who have already come close to achieving a quadruple-double or at least could in today’s game.

Paul has a savvy for the game that few in the league can match. He plays the passing lanes well and has quick hands when on the ball, which makes up for his lack of size.  If he were to get a quadruple-double it would surely come with the customary categories of points, assists and rebounds with the fourth category being steals. He has never reached 10 plus steals but came just shy with a career high 9 in a game in 2008.

Jan. 26, 2009 was the closest Paul has ever come to reaching a quadruple-double when he posted 15 points, 15 assists, 10 rebounds and 7 steals. He’s a little slower than he used to be, but with the great court awareness he possesses he’s as a legitimate a threat as there is to the quadruple-double legacy.

Athleticism personified is Westbrook. With good size and reach for the point guard position combined with his  fearless attitude, he is definitely someone who can potentially obtain the quadruple-double.

His closest game came on Feb. 6 2010 when he amassed 21 points, 10 assists, 8 steals and 7 rebounds. He threatened again on Nov 30. 2012 with a full stat line of 27 points, 13 rebounds, 8 assists and 7 steals. He is pit bull-like aggressive on both ends of the floor and it’s almost a wonder how he hasn’t already done it. Going forward, after multiple knee  surgeries, it will be interesting to watch if he stays as aggressive taking the risks that may be necessary to reach double-digit steals.  I like his chances better than most.

One of the craftiest players in the game today is Rondo. He is very unassuming on defense at times which lulls opponents into a false sense of security. He often looks like the kid sleeping in class but when the offensive players get comfortable he springs to life with answers by stripping the ball or playing the passing lane.

Rondo has had some pretty hefty lines but his closest game to a quadruple-double was probably Mar 23. 2011 going for 6 points, 11 assists, 11 rebounds and 8 steals. An Apr. 7, 2009 game wasn’t too shabby (14 points, 8 rebounds, 8 assists and 7 steals) but he failed to get a double-double despite the nice overall line. Rondo’s ACL injury is going to take some time to recover from and it would be stunning to see him produce anything quadruple-double threatening this upcoming season. But look out after he’s back to full speed. 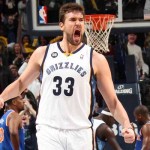 Without a doubt Gasol is the biggest “reach” on this list. He has never blocked more than 8 shots in a game and has only reached double-digit assists twice in his career. Still I will make a lukewarm argument for the reigning Defensive Player of the Year.

Gasol is an unselfish big who has gained a larger role in the Memphis offense in recent years. He posted a career high 19.2% usage rating last season. They liked running him at the high-post where he could makes passes to Zach Randolph on the block or set brush screens for guards.  This strategy saw him post a career high 4.1 assists last season and with an added shooter (Mike Miller) he could be even better if used the same way. Now of course the Grizzlies have a new coach going into the new season so we have to see how Gasol gets used going forward.

To date Gasol’s closest game to a quadruple-double came on Jan 21. 2012 when he posted 20 points, 11 rebounds, 6 blocks and 5 assists. Yeah…I know it’s not that close.  But if he can get some cheap blocks one night to bolster that category the rest could come a little more easily than previously described. OK that argument was more of a cold case than a lukewarm one but work with me a little…

Howard has been the anchor of his team’s defense throughout his NBA career. When healthy he is one of the best shot-blockers both on the ball and from the weak side. Howard has blocked 10 shots in a game only once but has reached 8 on multiple occasions. But it would appear that reaching double-digit blocks could easily be Howard’s third category in search of a quadruple-double…not his fourth.

Somewhat stunning, Howard has never had more than 7 assists in a game. Given the attention he received on the block in his time in Orlando, one would think he would have kicked out or hit cutters to attain 10 assists even once.  Keeping in mind that assists are predicated upon another player completing the play, it’s still shocking that 7 is his career high.

That said, now that Howard is on the Rockets his chances should increase.  The Rockets play with a pace (1st in the NBA last season) that can help his cause greatly. Pace equals extra possessions which can lead to extra assists. Not to mention the Rockets have good shooters that can make defenses pay for doubling Howard on the post.  As far as bigs go, Howard probably has the best shot of getting his name into the history books with a quadruple-double.

As the leader of Adidas’s quick ain’t fair commercial,  Wall’s speed makes him a threat on the defensive side of the ball to potentially get 10 steals and reach a quadruple-double. His career high in steals is 9. Wall has matured greatly since entering the league and is becoming more of a leader which is paramount for the point guard position. He truly can do a little of everything.

On  Apr. 25, 2012 he posted 21 points, 13 assists, 7 steals  and 7 rebounds which was his closest game to a quadruple-double to date. He is still getting better while it can be argued that everybody else listed has plateaued.

J-Smoove has had some freakish lines in his time in the NBA. Fantasy owners had to love this guy especially in the early stages of his career. Smith could make an assault on a quadruple-double with either blocks or steals and that’s not something any other player can legitimately say. He has one 10 block game to his credit albeit nine years ago.

Smith joined the Pistons over the summer where he will now have to compete with some aggressive rebounders and an emerging shot-blocker in Andre Drummond on his own team. The opportunity to reach a quadruple-double might have passed when he inked a new deal in Motown but the talent is there.

For what it’s worth LeBron James has a career high of 7 steals but he has never put together a game where he truly threatened for the quad.  Teams are usually conscience of him as a defender and would be wary to continue to go at him where he could get 10 plus thefts in a game. LeBron has renewed a focus on defense and he is trying to become Defensive Player of the Year so he is always worth mentioning.

Kobe Bryant’s career high in the “off” category for a quadruple-double comes with 7 in steals. Kobe doesn’t do enough in bulk consistently across the board to warrant much consideration for this feat.  Given his legacy I mention him here simply for cosmetic purposes as many of his fans think he can do everything, but this is one thing that just seems out of his immense statistical reach. Remember he is a 17 year veteran coming off an Achilles injury too.

Not in the same category as LeBron or Kobe, I like the following guys as super deep sleepers to make pushes for a quadruple-double sometime in their careers. DeMarcus Cousins, Paul George, Al Horford and Kemba Walker all have across the board skills to make a push. When I say deep sleep I mean coma-like sleep but they are on the radar nonetheless.

Hopefully one day soon someone will get it done again. I can’t wait for a rapper to remake Ice Cube’s ‘Today was a good day’ song with the lyrics “Get me on the court and I’m trouble, last week messed around and got a quadruple-double.”

Ice Cube – Today Was a Good Day video
Stats.NBA.com)
AndroidRSS
Please read our privacy policy Opinions expressed on Shaw Sports are those of each individual contributor and not the site as a whole. If you are interested in contributing to ShawSports.Net please email us at warren@shawsports.net