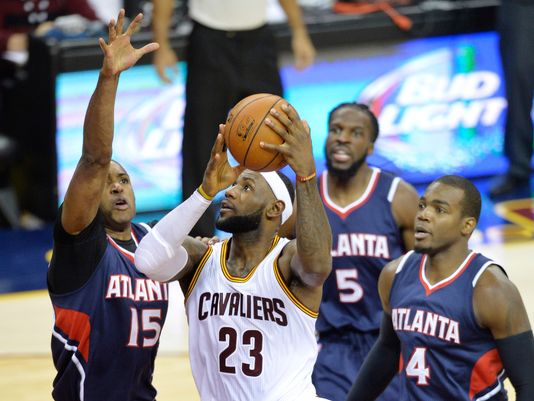 It has finally arrived….after 82 games the 16 best teams in the 2014-2015 regular season have an opportunity to make a run for the trophy. We are here to break down the 8 from the Eastern Conference with special guest Dan Devine from the Ball Don’t Lie blog on Yahoo Sports. On the show we will discuss:

Can the slow plodding style of Brooklyn with Deron Williams and Brook Lopez slow down the crisp and aptly paced Atlanta team? Will Jeff Teague be consistent in this series and throughout the playoffs? Will Jarrett Jack be the X factor for the Nets or will Bojan Bogdanović be more key. Dan seems to think Mike Scott will be huge for the Hawks and find out who he has moving on.

In probably the most unexpected series matchup the Celtics find themselves up against it facing the LeBron James, Kyrie Irving and Kevin Love. Boston’s offense will rely heavily on the play of Isaiah Thomas but Dan says Iman Shumpert can greatly impact his ability to score in this series. The Celtics will need all hands on deck including the likes of Jae Crowder and Jonas Jerebko to play lots out and that probably still won’t be enough.

So is Milwaukee just happy to be here or do they think they can upset Chicago for real? It will be great for Khris Middelton, Michael Carter-Williams and Giannis Antetokounmpo to get some exposure but can their youth and length truly disrupt the Bulls on both ends? Pau Gasol and Jimmy Butler have led the Chicago most of the season and with Nikola Mirotic and a semi-healthy Derrick Rose it’s hard to envision them getting bounced early. Jason Kidd will have to work wonders and get key contributions from Ersan İlyasova and Jared Dudley and those aren’t exactly house hold names.

In what should be the most competitive series in the East the backcourt of John Wall and Bradley Beal faces Kyle Lowry and DeMar DeRozan. However it might be the battle down low between Jonas Valanciunas and Marcin Gortat that makes the biggest difference in the series. Can Paul Pierce bring out some heroics of yesteryear or are the Raptors ready for some real success?

Don’t miss the series predictions from Dan Devine and we weigh-in with our thoughts as well. It’s the NBA Playoffs and it’s about time.
AndroidRSS
Please read our privacy policy Opinions expressed on Shaw Sports are those of each individual contributor and not the site as a whole. If you are interested in contributing to ShawSports.Net please email us at warren@shawsports.net