You are here: Home / Basketball / The Baseline: NW Division preview with Tony Jones 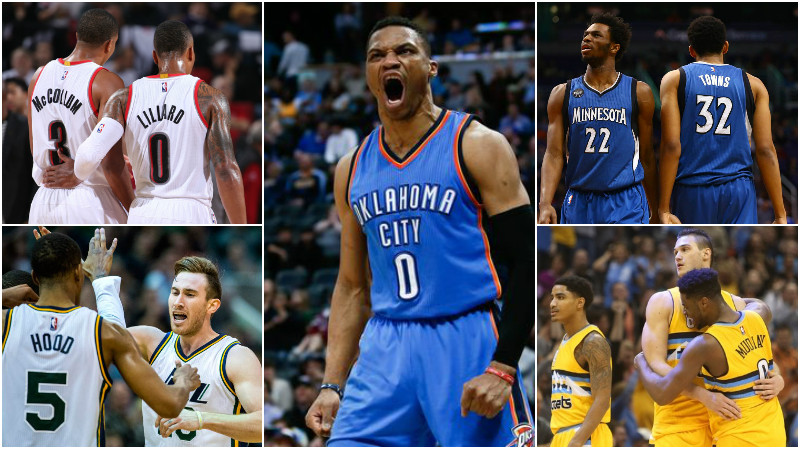 NBA training camp is peeking its head around the corner and we are waiting with open arms. In celebration The Baseline continues its tour of  the league…division preview style. On this week’s show we preview the NW Division which is heavy on teams looking for entry into this year’s playoff. To help us out we have Tony Jones from the Salt Lake Tribune as a special guest breaking down each team and their potential playoff chances.

Quite possibly the most exciting young team in the league the Wolves look for Karl-Anthony Towns to take a leap towards being elite. How will Andrew Wiggins and Zach LaVine compliment the big KAT? Is Ricky Rubio poised for a new destination or will he help the development of Kris Dunn? Can Shabazz Muhammad continue to flourish under Coach Thibs and can the team find a suitor for Nikola Pekovic?

Mike Malone is probably the biggest key to the team’s success having to manage and balance a prickly mix of veterans and youth. Nikola Jokic, Emmanuel Mudiay, Gary Harris and Jamal Murray are the team’s future but Danilo Gallinari, Wilson Chandler and Kenneth Faried all still need minutes. What type of improvement if any can we expect from the Nuggets?

The time is now for a Utah team that’s been on the cusp of the playoffs for two seasons. Gordon Hayward has capable help in the forms of Rodney Hood, Derrick Favors and George Hill. The Utah bench is also stacked as one of the best in the league with Dante Exum, Alec Burks, Joe Johnson, Trey Lyles and Boris Diaw. It will be a make or break or year for a team that has everything it needs to compete in the west.

Damian Lillard and C.J. McCollum form one of the best backcourts in the NBA offensively. Their combined success stirs the drink of Portland but this isn’t a team that will sneak up on the rest of the league again. The team is loaded with bigs and now burdened by heavy salaries from role players like Evan Turner and Allen Crabbe. How will Terry Stotts reinvent this team to maintain success?

The world is on notice for the season Russell Westbrook is going to unleash but can his new teammate Victor Oladipo help OKC form a new dynamic duo? The team still needs shooting and Enes Kanter might be the trade bait to land an outside threat or true small forward. We look forward to the development of Steven Adams and contributions from Cameron Payne, Josh Huestis and Ersan Ilyasova. But without Kevin Durant just how far can this Thunder team excel this season?