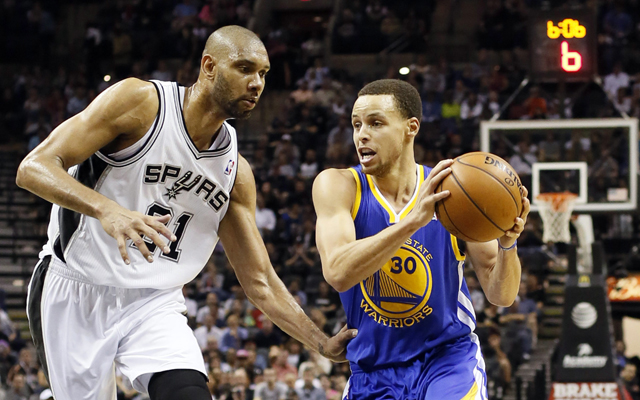 We are backing up our East preview with another great guest for the West preview in Kurt Helin from Pro Basketball Talk on NBC.  The NBA Playoffs are here check out Kurt’s thoughts on the following series.

It’s great to have Anthony Davis in the playoffs but he is going to need a lot of help if the Pels are going to be competitive. Will Ryan Anderson, Jrue Holiday and Tyreke Evans all show up to aid the ‘Unibrow’? Chances are Golden State’s depth and versatility are too much for New Orleans in this series with Stephen Curry the likely M.V.P, Klay Thompson‘s two-way ability and Draymond Green‘s tenacity. But that’s why they play the games.

James Harden has propelled Houston to a very lofty seed without much help from Dwight Howard this season but drawing the veteran Mavs isn’t going to be a picnic. Kurt Helin doesn’t believe in the mantra of playoff Rajon Rondo despite a favorable matchup at the point position. He does think Dirk Nowitzki is poised to be menacing and could force the Rockets into a long series. It’s a rivalry renewed with the fact Chandler Parsons and Jason Terry will be playing their former teams to add a little spice to the series.

The running joke is Doc Rivers might have had a heart attack when the Spurs fell to the sixth seed. Doc’s Clippers seem to have something missing when it comes to getting over the hump besides a sub-par bench that can really only go seven-deep behind Jamal Crawford and (gulp) Spencer Hawes. Chris Paul and Blake Griffin are going to have play 40 plus minutes but they are capable of it. Coach Pop will hack DeAndre Jordan in a heartbeat so L.A. may be forced to use their sparse alternatives leaving easy pickings for Tim Duncan down low. Kawhi Leonard is going to be all over the court and the edge in this series seems to lean towards the defending champs.

Kurt Helin says this is a war of attrition made intriguing because many key guys for Memphis are banged up. Mike Conley, Marc Gasol, Tony Allen, Courtney Lee and Zach Randolph all have injuries. The Blazers aren’t exactly whole either with LaMarcus Aldridge nursing injuries to both hands and a leg. We already know Damian Lillard is going to be looking to invoke ‘Lillard Time’ throughout the series but a guy like C.J. McCollum is going to play a big part in the outcome. It’s not an easy one to pick but find out which way the wind blows in this series.

This is a great show with a knowledgeable guest. You won’t want to miss the predictions and smart insight on the keys to each series.