You are here: Home / Basketball / The BIG3’s big debut in Brooklyn 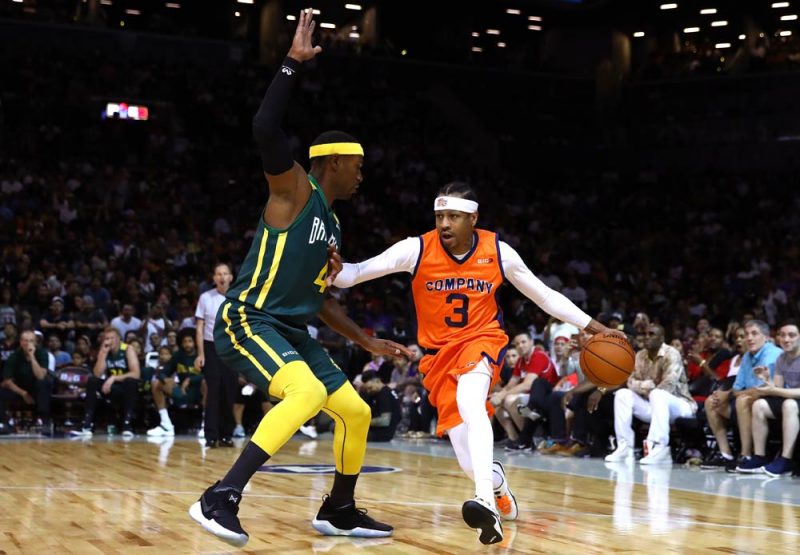 Some questions were answered and some new questions were formed after the BIG3 had it’s opening day in Brooklyn on June 25th. Many wanted to know how competitive this venture would be after the spectacle draft event in Las Vegas casted doubt on the legitimacy of the league.

After the first week of games there is little doubt the players, coaches and even the fans are taking the BIG3 very seriously–and they should. A capacity crowd of 15,177 filled the Barclays Center to watch the inaugural weekend and pay respects to legends of basketball past. A four-game slate will be the staple of each stop on tour and the event is truly family-friendly. With the exception to the length of time it takes to get through the games, the BIG3 has a formula that should generate interest in each city on the tour.

Starting in Brooklyn was a stroke of marketing genius for the league. BIG3 sandwiched itself between the NBA Draft and the NBA Awards show also happening in New York which created more buzz and generated extra support from the league as well. James Harden, Paul Pierce, Jalen Rose, D’Angelo Russell, Lou Williams and other current players were in attendance. Even Whoopi Goldberg and LL Cool J showed love from the entertainment world which awed some of the players themselves.

The competitive nature of the league was set in the opening game where 3 Headed Monsters battled the Ghost Ballers. Guys were grabbing, diving and of course complaining to the refs which spoke to the intensity level that permeated throughout the day. Still, for many attendance they just wanted to get a glimpse of the Hall of Famers and NBA favorites that have graced the rosters of the BIG3. Cameras flashed when the likes of Julius Erving, Clyde Drexler, George Gervin, Rick Barry and Gary Payton strolled through the arena fulfilling their coaching duties. But the Barclays Center was a supernova of light when the league’s true ambassador, Allen Iverson, made his way to the court.

Iverson has a following that is rock star-like and that is something the league hopes to capitalize on, but he said that he doesn’t want to mislead people into thinking they’ll see the Iverson of old. ‘The Answer’ will do more coaching than playing and that will be by design as evidenced by his comments in the post game interview.

While Iverson is succumbing to father time, others like his teammate Andre Owens are looking at BIG3 as a potential shot back into the league. Owens said it means a lot to him to have this opportunity and although he’s a successful business man off the court, he still has a passion for hoops. Rasual Butler is another guy many suspect is using the league as a proving ground to potentially get back to the NBA. Butler took the second most shots of any player in the league with 26 attempts in his opening game. The player who took the most shots with 27, Al Harrington, is on a different mission.

Harrington said he’s not looking for his next 10-day contract and that he just wants to play, but he’s not going to stop another player’s shine so to speak. “For those guys–if that’s what they are on–if we can communicate that then I wouldn’t mind taking less so they could put themselves in position” he said.

The opening weekend had intrigue and provided some exciting moments including a game winner from DeShawn Stevenson:

DeShawn Stevenson with a game-winning 3 at the #Big3 pic.twitter.com/qyLZqnWlHD

It remains to be seen if that type of excitement will still be available in the league’s final few weeks but many involved seem to think so. Mike Bibby, Rashard Lewis, Rick Mahorn and Payton all spoke about the need to stay in shape and players getting their wind as the weeks go by. Clyde Drexler said as a coach he’ll be very interactive with his guys. He expects them to listen to their bodies and to let him know how they are feeling on the court.

That optimism is soured by the fact that Iverson himself knows he can only do so much and brings into question if these retired ballers will be able to stay healthy enough to make it through the entire season. Jason Williams, Corey Maggette, Rashad McCants and Kenyon Martin all suffered injuries during the day. While Martin and McCants finished their games, Williams and Maggette did not and are extremely questionable for the next stop on the league’s tour in Charlotte.

Nothing will ruin the league like players breaking down and just making courtesy visits across the United States. However, if the BIG3 can capitalize on more recently retired veterans in the future then the level of play will improve…as well as the likelihood of health. Owens threw out some names in the post game presser on potential guys showing interest.

The BIG3’s inaugural season is fueled by intrigue and love for nostalgia. What’s old is new again but these aged players create a different product from what we are used to. Hence, expectations from fans will need to shift.

Will the BIG3 feed the appetite of the basketball starved? Each person will have to take a bite for themselves this summer.