You are here: Home / Basketball / The Houston Rockets are built to beat the Warriors 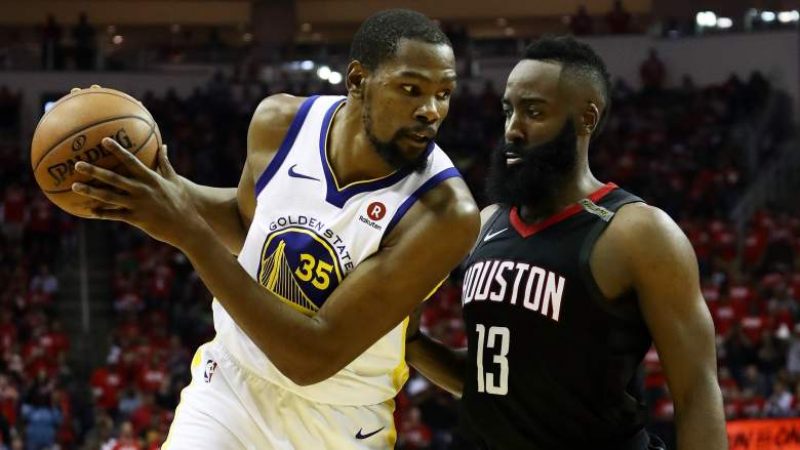 For the first time in over half a decade, the Golden State Warriors are vulnerable. After winning three titles in four seasons, nabbing one of the biggest free agents in NBA history in Kevin Durant, and continuing to field the best shooting backcourt in the NBA, the Warriors are starting to crack.

Never before in this short dynasty—yes, it’s officially a dynasty—have the Warriors played three games on the road in the first round of the playoffs. The team’s series against the Los Angeles Clippers, while never really swaying in favor of L.A.’s best team, felt too close for comfort. The Clippers may have lost three of the games by double-digits, but their nagging persistence to try and upend the Warriors made an enormous statement.

There was Patrick Beverly and his six feet of unbridled hustle matching up with Durant and Draymond Green, two players requiring very different styles of defense. There was also Lou Williams and friends, who proved that the Warriors’ interior defenses, even fortified by Australia’s best defender Andrew Bogut, were plenty penetrable.

But most importantly, the Clippers proved that the Warriors’ once steely mentality, which led them to crush LeBron James and the Cleveland Cavaliers in four games, is malleable.

This is great news for the Houston Rockets, who will visit the Warriors for Game 1 on April 28. Despite a reshuffled roster, an older Chris Paul, and newer, untested players taking the court, Houston is exactly the team it wants to be in a series against the Warriors.

The odds of once again bricking 27 consecutive 3s in a Game 7 situation are unlikely. Against Golden State the Rockets have been money from deep, barring a startling 26.8 percent shooting night in March. Even then, the lone, two-point loss the Rockets suffered at the Warriors’ hands came on the back of then-healthy DeMarcus Cousins’ 27 points.

Without Cousins’ offensive firepower to exhaust Clint Capela, the Rockets have the upper hand running their patented pick and roll. The Warriors have one fewer body to engage Harden after taking Capela’s screen, meaning the Warriors’ already penetrable paint will exist at the risk of ushering Harden to the free throw line time and again. And with Eric Gordon, PJ Tucker and Austin Rivers all shooting over 40 percent from 3 thus far, the understaffed Warriors will have their hands full with recovering on switches and kickouts.

But more than the Rockets’ game being tailored to asphyxiate the Warriors, Houston’s personnel is the right brand of spunky bravado and hardworking hustlers to cause Golden State mental fatigue. Though not as proven as his former Clippers’ teammate Williams, Rivers carries himself with a similar bluster. Shooting stretches of blanks is inconsequential if he connects on something.

And like the troublesome Beverly, Gordon has become Houston’s patron saint of defense. Gordon held Donovon Mitchell to just 38 points through 180 possessions in the first round and in the process deflated the Utah Jazz offense. The Warriors might not field a Mitchell cutout, but Gordon’s degree in disruptiveness is essential to stopping a Golden State team that thrives on momentum.

Of course, the Warriors are the reigning champs. They have four of the most talented players in the league and the Rocket’s 2018 embarrassment on which they can prey.

History favors the Warriors, as it should; there is no discount for five years of sheer dominance. But Houston has proved formidable, and with one of the greatest scorers in league history in its arsenal, the NBA might be watching the end of an era in the West.