You are here: Home / Baseball / Featured / The Red Sox Prove That Hard Work Pays Off 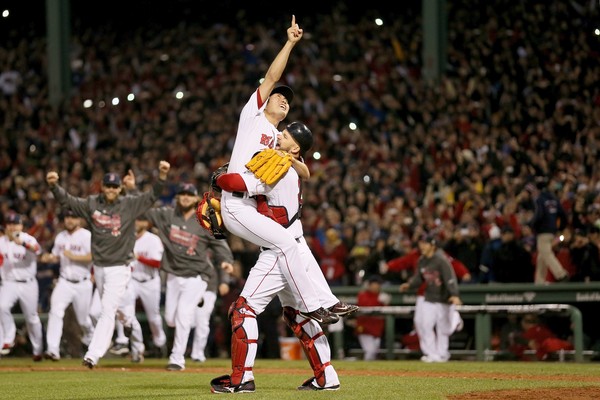 Matt Carpenter swung in vain at a Koji Uehara breaking ball and the Boston Red Sox became the 2013 World Champions.

Whether you were a Red Sox fan or not, watching this team charge the mound in joy was an awe inspiring sight. Their jubilation was ultimately a tribute to hard work, belief in one’s self and true dedication. It had been just over a year ago the Red Sox had ended their season in last place with little reason to be optimistic about the future.

On paper, the Boston team assembled at the beginning of 2012 was far superior to the team that ran off the field celebrating this October night at Fenway. The 2012 BoSox felt like they were built to win and most analysts agreed. Carl Crawford was expected to bounce back from an injury filled 2011 to regain his All-Star form. Adrian Gonzalez had not only hit 27 home runs in 2011, but also led the AL in hits. The rest of the Boston lineup was littered with names you have grown to love (or loathe if  you were not a fan), Ellsbury, Pedroia, Youkilis, David “Big Papi” Ortiz. Unfortunately for that 2012 squad the games are not played on paper, and things turned out very differently on the field. The team, led by Bobby Valentine, quickly proved to be a dysfunctional disappointment. Youkilis, Gonzalez, Everett and former World Series hero Josh Beckett were all dealt away mid-season and the disgraced Red Sox finished 24 games under .500.

Boston management replaced those stars with bit players in 2012. Mike Napoli, a fine hitter, was charged with replacing Gonzalez. Left field was given to Jonny Gomes and Daniel Nava, who both had career batting averages under .245, to fill the void of Crawford. Third base would be manned by Will Middlebrooks, short stop by steady but unspectacular Stephen Drew. On the farm prospect Xander Bogaerts waited in the wings to replace one of these two if need be. The one “star” added to the lineup was right fielder Shane Victorino, but even he seemed to be on a steady decline over the last 3 seasons. The core three of Ellsbury, Pedroia and Ortiz remained, but the intimidation factor from those name had dissipated.

Truth be told none of the changes may have mattered without the resurgence of the Red Sox pitching staff. Jon Lester, Clay Buchholz and Felix Doubront all vastly improved in the 2013 season. Meanwhile John Lackey, the eventual World Series game 6 winner, came back from missing the entire 2012 season to look like he was back in his Anaheim Angels prime. Of course the crown jewel of the pitching turnaround was expected set up man Uehara, who did about as good of a Mariano Rivera imitation as you will ever see.

Looking back on the season, the 2013 Red Sox were pretty good from the beginning. Outside of a brief period in mid to late May the Red Sox never fell out of 1st place in the AL East. But it wasn’t until late August that it became clear that the team had jelled into something special. On August 23rd they went to Los Angeles to face the Dodgers tied with Tampa Bay for the division lead. The Dodgers were red hot, winning 13 of their last 15, and defeated the Red Sox in the 1st game. The resilient Boston squad came back and won the next two. The Red Sox then went on a run, riding roughshod over teams desperate for wins for the next 20 days. They went 15-4, including 6-1 against the hated Yankees, to build a 9 and a half game lead. The team that had on paper taken a step back had gone on the field and taken huge steps forward. Those steps culminated with a championship celebration at Fenway for the first time in nearly a century.

The Boston Red Sox are the champions of the world…and they are also a valuable lesson to us all.