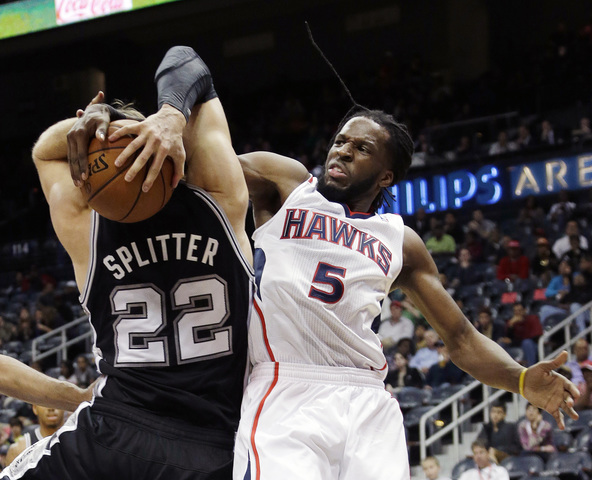 The entire world saw how to properly construct a dynasty and maintain it when the San Antonio Spurs defeated the Miami Heat 4-1 in the NBA Finals. A franchise’s concept should naturally be to build through the draft and marginally buy to construct a fair and decent product.

NBA teams in this current era want the easy way out. Trade a bushel of players to get one ‘star’ player leaving the roster void of a supporting cast.

Atlanta has two “Spurs” in their system(GM Danny Ferry and coach Mike Budenholzer) and in my opinion could eventually become the “Spurs East”. The following in an overview of Atlanta’s current roster structure:

Jeff Teague seems to be the fire that keeps these Hawks ablaze.  He’s not Tony Parker in retrospect but he is a great player in a Spurs-like system. Teague is a key piece that you need to spark the offense when their is a drought.  Behind Teague, Dennis Schroder is being described as the next Rajon Rondo with a jump shot. Schroder gives the Hawks a playmaking point guard off the bench who can be a force if developed correctly. Shelvin Mack is a plug and play type of guy whose claim to fame lies in his maximum effort whenever he’s on the floor.

Korver is the best shooter I have ever seen wear a Hawks uniform. In all honesty Kyle is a decent starter but that type of hot sauce shooting really needs to come off the bench. Sweet Lou does not currently have a concrete role on this team. But he is good whenever he hits the floor and should be better after next season two years removed from injury. John Jenkins in due time, I predict, will be the Danny Green of this ball club. Jenkins had a setback with nerve damage in his lower back and was forced to sit out his second year.

If anyone was slated to replace Josh Smith on the defensive side of the ball I wouldn’t have thought it would be Carroll. Many fans have stated the Hawks need to bring in a Kawhi Leonard type of player to the team. While I do agree with that statement, we may already have one in Caroll and there isn’t a Kawhi in this year’s draft. Carroll may not be as athletic as Leonard but he still can develop to be a decent player.

Millsap signed as  a free agent last offseason to a deal that is often described as a steal. Millsap signed at two years for a total of $19 million and made the All-Star team last season. He thrived as the team’s first option after center Al Horford went down for the year. Backup forward Mike Scott showed the team that he can score off the bench posting 9.6 points per game in just 18.5 minutes and he did the majority of his work from the outside. Stretch big men are a commodity to a Spurs-like team. Mike Muscala joined the team late in the season but showed promise with an extremely high ceiling in my opinion.

Horford has been a key cog to this team’s engine for many of years, but its time for him to shake off the rust and stay healthy. Pero Antic played phenomenally (all things considered) during the regular season and was able to spread the floor which allowed Teague to emerge into the player that he is. Stretch fives are needed for the type of offense that the Hawks run. Lucas “Bebe” Nogueira is a defensive player that runs the floor excellently. If Bebe can develop an offensive game he could one day be the Hawks’ version of David Robinson.