You are here: Home / Basketball / Threat to the Throne: How the Raptors could keep LeBron out of the Finals 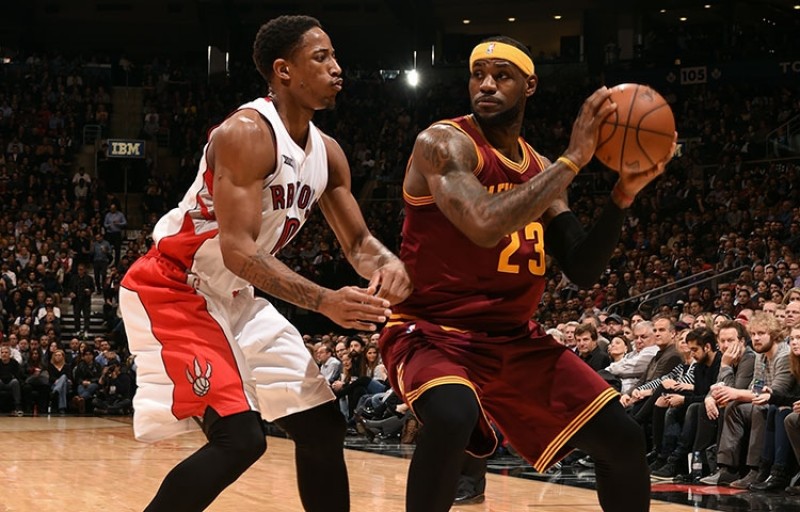 Is this the year the king, LeBron James,  goes down before the finals? Most would say no, but I’m here to tell you why it is possible.

There is a little underdog team that has the potential firepower to beat the Cavaliers in a seven game series and they are the Toronto Raptors.

The Raptors have depth, size and talent. They are led by all-star point guard Kyle Lowry (21.9 points, 6.4 assists and 5 rebounds per game) and  DeMar DeRozan who is averaging a career-high 23.8 point per game.

Those are the guys you know but the bench of the Raptors is the key to their run in the east. Cory Joseph who spent several years under the coaching of Gregg Popovich, Terrence Ross a high- flying three-point wing and Bismack Biyombo a huge presence in the paint round out an improved bench that has defined roles.

The Raptors have handled the Cavs well in the regular season with a 2-1 record and have shown a propensity to match up well with defending Eastern Conference champs. They won on Nov. 25 when Lowry dropped 27 points and 6 assists. The Raptors took control of the season series by beating the Cavs by 2 on Feb. 26 as Lowry dominated with 43 points and 9 assists. Mixed in between those wins was a meeting on Jan. 24 where the Cavs won easily by 22 points.

With all of that in their back pocket the Raptors  are looking forward to return of DeMarre Carroll. He was brought specifically to space the floor and help defend guys like LeBron in the playoffs. In the Nov. 25 meeting, the only which Carroll was healthy for, he helped to hold LeBron to 6-16 from the field.

With a handful of games left Toronto needs to be focused on potentially clinching the 1-seed and stealing home court away from the Cavs. If they can do that and get Carroll back, this team could be a real threat to the King and his band of unmerry men.