You are here: Home / Fighting / Timothy Bradley remains undefeated and wrongly unrespected as a boxing great 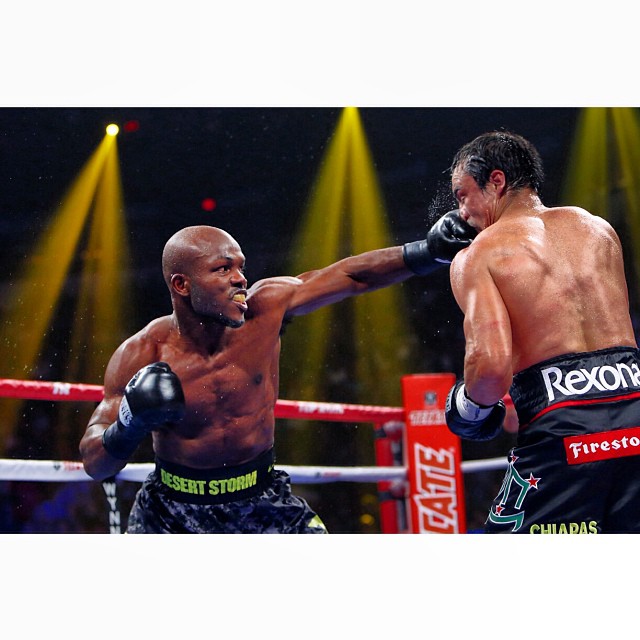 Those were the two very distinct things at stake for Timothy Bradley and Juan Manuel Marquez as they squared off at the Thomas and Mack Center in Las Vegas.

Neither man got exactly what they came for as the judges scored a very questionable split decision in favor of Bradley. The questionable part comes in the “split” portion of the decision…it should have been unanimous.

Bradley had a superb game plan that he executed to near perfection. He secured no less than 8 of the 12 rounds but still one judge scored the fight in favor of Marquez.

He jabbed, slipped and turned his head repeatedly avoiding most of the counter-punches launched by Marquez. Where he was flawed was in his multiple attempts to catch Marquez with sleep-inducing punches.

Bradley would at times swing wildly looking off-balance but because of his speed he was able to scurry out of harm’s way when Marquez attempted to counter.

Marquez was able to steal a few rounds with big left hooks and a few overhand rights but was unable to locate Bradley for the majority of the fight.

The loss is the seventh of Marquez’s Hall of Fame career and prevents him from becoming the first Mexican to hold a belt in five different weight classes. History on that front has eluded him for now and it remains to be seen what if anything is left for Bradley to strive for in the sport.

Bradley retained his Welterweight championship but still might not have the respect he craves and rightfully deserves after a dominating performance. He was booed, again, after the fight as if he paid off the two judges who actually scored things correctly.

It doesn’t quite make sense and Bradley’s search for respect in the sport continues despite a perfect 31-0 record.

He is trying to make the hate his fuel and become the antagonist boxing may be craving. The problem is that he isn’t a bad guy and is trying to play a role that doesn’t really suit him. That said trying to be the ‘woe is me’ fighter openly seeking acceptance would be even less lucrative for him trying to headline pay-per-view fights.

So he embraces being the bad guy while not so secretly wanting to be recognized as one of the greats.

The question is why won’t anybody listen?