You are here: Home / Entertainment / Triple 9’s cast and action bolster its worth for movie goers 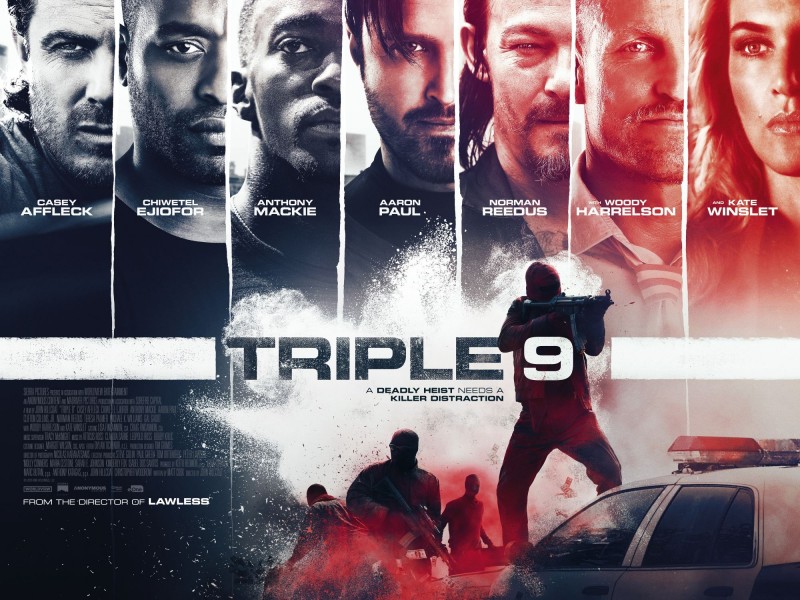 If Sicario and The Departed had a baby the likely offspring would be the intense crime drama ‘Triple 9′ keeping in mind that attractive parents don’t always make attractive kids. That’s not to say ‘Triple 9’ is ugly or doesn’t work…it actually works very well but seems destined to be underrated in a genre that has many doppelgangers and that will be a shame.

The mix of foreign gangsters, scorned military and crooked cops are familiar angles on the big screen and while the surprises were mild–this film still managed to entertain in a big way. The bodies Pringled up almost unmercifully in this “everybody can get it and eventually does” gritty drama set in the mean streets of Atlanta, which is a city that is usually portrayed as less problematic than it was in ‘Triple 9’. Location decisions aside…the movie delivers a stellar cast, gratifying action and well-timed humor (for the most part) throughout the film.

It takes a bit of time to get orientated to the characters and only some of the back stories are piecemealed throughout the 115 minutes of run time. But after some quick character name dropping in the opening ‘Triple 9’ shifts into a fast-paced bank robbery that makes you say “Alright cool, I guess we’ll figure out who these dudes are later.”

Still, there are a number of characters to keep track of and none are designed to make the audience like or dislike them. The “good guy” and “bad guy” themes are blurred lines at best for all entangled except one of the main characters and I certainly wasn’t pining over what a “goody two shoes” that character was. Everybody is sinning as a means to obtain what they deem to be their personal greater good and that was pretty fun to witness on screen. I will say, you’d be hard-pressed to root for anyone associated with the Kosher Mafia in the film but even they had an angle.

While you may not understand who everyone is or why you should care about them, the casting was well done. Movies with a plethora of well-known actors have a tendency to fall short of the mark as fellow thespians try to out do their counter-parts in failed attempts to stand out from the group. ‘Triple 9’ was well-written in the sense that each actor was given lines that fit their role in actually pacing the film’s plot. I can’t say I was left longing to see anyone on screen more than they actually were. Everyone shined in a way that made sense for the film.

Like most movies ‘Triple 9’ has an array of topics in play but its heart and soul is the action associated with the heists and the subsequent investigations as a result of those criminal atrocities. It does drag ever so slightly towards the end and if you like closure in your movies there are some open-ended questions that will force you to develop your own theories. However, I think it works in the overall ambiguity that permeates throughout the film and it’s worth your time if you are into the genre.