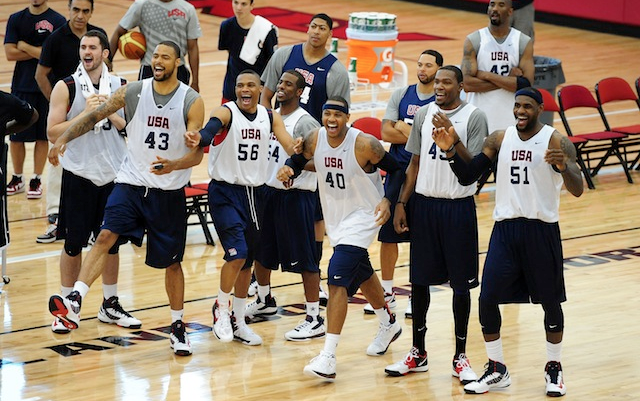 USA Basketball will be back this summer and they have announced their All-Star-like roster of possible participants for international play over the next two years. 28 players have been preliminary selected and there are likely to be a few drop outs due to injuries and contract situations.

As of now the roster is full of all-around guys with plenty of experience. USA Basketball Chairman and National Team Managing Director Jerry Colangelo  made the following statement after the selections were announced.

“This is the first step of building the USA Basketball National Team pool of players for 2014-16. This roster is extremely talented, deep and versatile. We are very fortunate to have 11 of the 12 members who won gold at the London Olympics wanting to be part of the national team program again. To receive that kind of commitment is remarkable and it demonstrates how much it means to our players to represent USA Basketball and their country.

Continuity and familiarity with international basketball are critical parts in our success, and between our coaching staff and these 28 players we certainly have that. Every one of the selected players has been involved in USA Basketball previously and that speaks to how well our pipeline is working. Because of injuries and circumstances that will develop where players won’t be able to participate, we know we need flexibility with the roster and as we did in 2006-08 and 2010-12, the pool of players will be fluid, so you will see the addition of players as they emerge and as they are needed.”

The most notable exclusions from the list include Dwyane Wade and Kobe Bryant. Both are all but out as they wind down their careers and try to focus on staying as healthy as possible for their respective teams. Other names missing include Jrue Holiday, Greg Monroe, Lance Stephenson, Jeff Teague and Chandler Parsons as well as others.

On the list is rebounding/defensive specialist Kenneth Faried who probably has the longest shot of any of making the roster. With so many players skilled on both sides of the ball it remains to be seen if specialists will be added.

As always the Americans will be the favorites no matter who is actually on the team for the FIBA World Cup in Spain or the Olympics in Brazil in 2016. Here is the full list of name courtesy of USA Basketball’s website.