You are here: Home / Basketball / Warriors dominate Game 1 of the NBA Finals 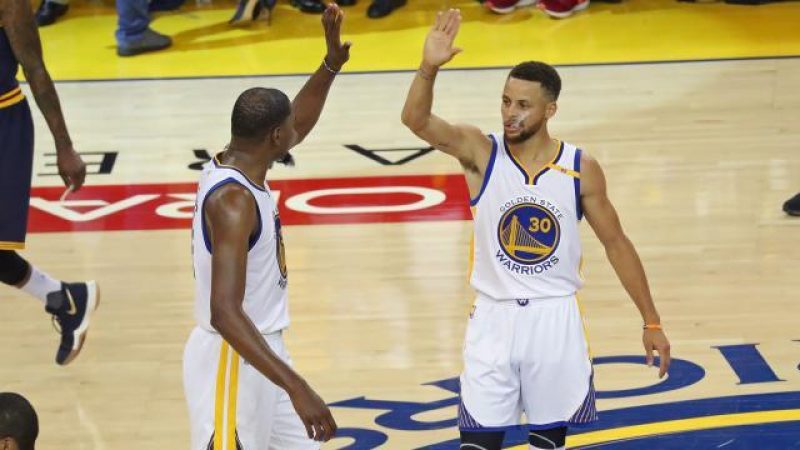 After much deliberation, and after almost losing interest quite frankly, the NBA Finals are now upon us. The Cleveland Cavaliers–the reigning champs–took on the Golden State Warriors in Oakland, California on Thursday night and it was a bloodbath of epic proportions that left me dumbfounded.

The first minute of the game was scoreless and included an air ball from Kevin Love as the teams worked to shake off the rust. JR Smith was the first to score for the Cavs taking a three pointer from the corner that barely touched the net it was so clean. Golden State fired back with a couple field goals in a row albeit some interesting missed shot opportunities by Zaza Pachulia. Multiple missed layups and brick shots by both teams had fans wondering if this was truly the Finals taking place.

Green to Durant for Alley Oop

Each team struggled to find their rhythm, but as the first quarter wore on they were able to successfully pull off a few three pointers in a row. Kyrie Irving got down to business driving to the rim with ease while Pachulia and Andre’ Iguodala found themselves wide open under the rim for easy jams. As the quarter drew to a close, each team appeared to have gotten the jitters out of the way putting on a slam dunk show. Iguodala threw up a buzzer beater at the very end of 1st putting the Warriors up 35-30.

The Warriors opened the second quarter playing solid defense forcing the Cavs to take poorly calculated outside shots that wouldn’t fall. The officials allowed more contact than I expected keeping players out of the post while pushing shots toward the perimeter. As usual, the Warriors offense moved quickly leaving the Cavaliers a little spun and confused making way for open shot attempts. By the 8 minute mark Cleveland had already produced 5 turnovers compared to the Warriors who had made none.

The Cavs were visibly shaken taking multiple threes in transition that were made off balance and out of desperation. It appeared as though they were trying to play too much like Golden State and weren’t focusing on slowing the ball down enough to properly execute plays. At just the right time, Irving was able to knock down a three while drawing a foul and capitalizing on the four point play to bring the score back to within 6. Heading into halftime, the Warriors had 42 points in the paint while the Cavs only recorded 16 with the score at 60-52.

Golden State opened the second half with as much enthusiasm as they had entering halftime grabbing a quick three out of the gate. The Cavs were limping from their lack of rebounding and high turnover rate and allowed the lead to creep up to 15 points with over 9 minutes left to go in the quarter. James missed his layups while Curry made his threes as the situation continued to spiral out of control for Cleveland. The bleeding finally stopped with Cleveland making a couple of key stops while capitalizing on the scoring end, but the lead remained in the Warriors’ favor at 12 points. What was concerning for the Cavaliers is that Irving–their point guard–was one of the only ones working for second chance points under the rim. He fought his heart out, but was ultimately out-sized and unable to finish.

Cleveland entered the 4th quarter down by 21 points, licking their self-inflicted wounds caused by turnovers and poor rebounding. At ten minutes to go in the game, the Cavs recorded their 17th turnover, and 4th team foul. Love recorded a triple double at 50% from three on 3 of 6 shooting while James and Irving did the heavy lifting on scoring combining for for 52 points. Unfortunately, not many of the other Cavaliers showed up to play. Only three other Cavaliers even scored in game 1, and their combined contribution didn’t come close to the efforts made by James or Irving independently.

The Warriors on the other hand fared much better as a unit than the Cavs. While Durant and Stephen Curry carried the load on scoring combining for a whopping 76 points, the rest of the team brought in solid contributions adding up to a total of 113 points by game’s end. The Cavaliers were held to a meager 91 points in what was an absolutely unacceptable performance from the defending champs. The Warriors move onto 13-0 in the post-season this year as they get one step closer to the title.