You are here: Home / Basketball / Warriors move on to 3-0 in Game 3 stunner 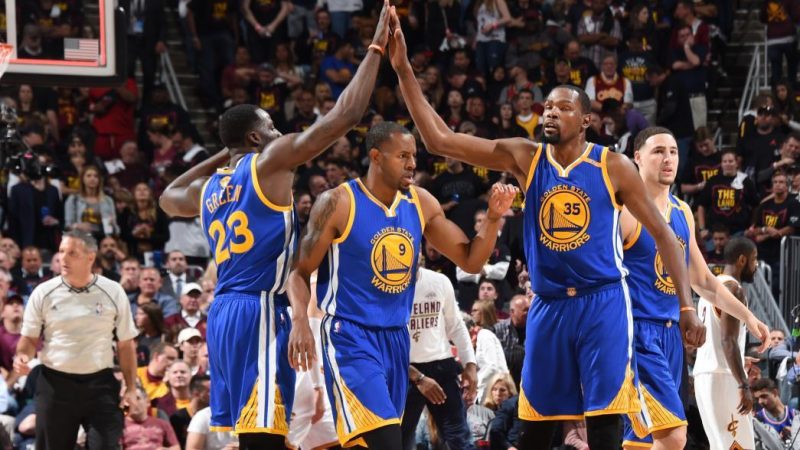 The Cleveland Cavaliers tried to save the basketball world in an attempt to not let down their home crowd in Game 3 of the NBA Finals. But alas, it wasn’t meant to be as the Cavs stumbled at the end to lose 118-113.  After two snoozers in Oracle the Cavs and Warriors played a properly contested game in Cleveland despite the fact it still resulted in a Cavs loss.

The Cavaliers got to work immediately by attacking the pick and roll aggressively. As Paul Pierce said before tip off, the game quickly turned into a three point contest with both teams hitting shots from distance. However, LeBron James powered his way to the basket early scoring 9 points in the first 5 minutes of the game. The Warriors got into early foul trouble putting the Cavaliers into the bonus with over 6 minutes left in the first quarter.

James collided with teammate Tristan Thompson at full speed giving his fans a scare as he laid on the ground for a few minutes before slowly getting up and shaking it off. Klay Thompson was also on early scoring 16 points in the first quarter helping the Warriors get to 7 of 9 from the three point line as a team. James took to the bench in the last few moments of the quarter, and the Cavs gave up a couple of threes and a two field goals putting them behind 7 points heading into the second quarter.

James Throws It Down

The Cavaliers opened the second quarter wasting no time working to catch up. A third foul on Draymond Green combined with a dunk by Kyle Korver–of all people–had Cleveland fans roaring and momentum shifting back toward the Cavs. The Cavaliers got aggressive in the paint getting stops while capitalizing on their scoring opportunities at 56% shooting. Tristan Thompson kept the momentum flowing rejecting Curry on an attempted layup under the rim followed by J.R. Smith denying Kevin Durant access under the rim. Golden State picked up the pace and got ahead of Cleveland on a few fast breaks putting the lead back up to 6 points heading into halftime.

Opening the second half, the Cavaliers and the Warriors were both shooting 51% as a team, but the Warriors were outperforming the Cavs from the three point line and moving the ball far better with 21 team assists compared to the Cavs who had just 6. Green acquired his fourth foul early in the quarter answered by Kyrie Irving with a drive to the rim making it a one point game. Love stepped back for a long three (his only make of the game) putting the Cavs up by 2 points–their first lead since early in the first quarter.

The Cavaliers worked to force the Warriors to make plays limiting the shooting sprees, but tough defense put the Cavs into early foul trouble with just under 6 minutes to go in the quarter. Love worked the offensive glass to get the Cavaliers multiple second chance opportunities while James picked up the and 1 under the rim to maintain the Cavs lead by one point. Uncle Drew officially came back in Game 3 putting on a show for his home crowd ushering momentum toward Cleveland with acrobatic shot after shot.

The final quarter of the game began with Cleveland ahead. Green recorded his fifth foul, and the Cavaliers went up by 7 making a few quick threes in a row. Love recorded his 6th steal of the game allowing the Cavaliers to capitalize on the fast break through Irving once more. Cleveland controlled the pace, and remained tough on defense working the offensive and defensive glass, but Golden State answered on the scoring end staying within striking distance of a win. Golden State held Cleveland and took back the lead with a stealthy three from Durant and the Warriors took the lead by 1. A Irving missed ensued followed by two Durant free throws and that was all she wrote.  Ultimately, the Cavaliers were unable to close after all their hard work and lost 118-113.