You are here: Home / Basketball / Warriors Taking Shape As Favorites 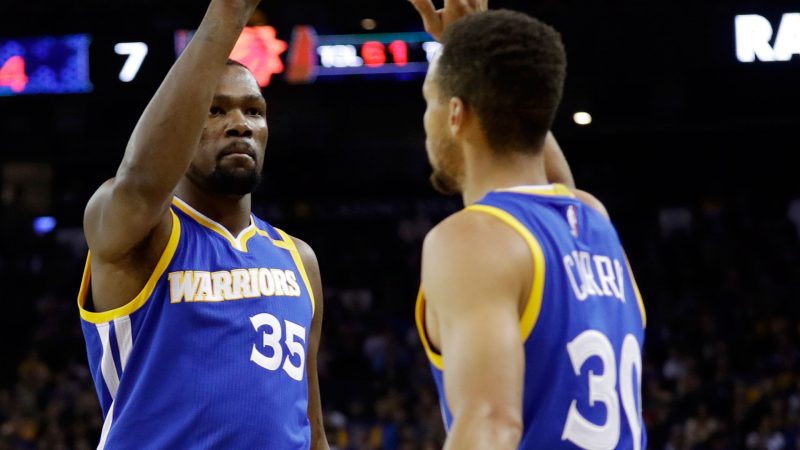 When Kevin Durant joined the Golden State Warriors, most NBA fans expected a special season and an offense the likes of which we hadn’t ever seen before. But when the season actually started and the San Antonio Spurs decimated the Warriors in Durant’s first game in blue and gold, expectations seemed to shift.

Of course, we all remember the Heatles, who took some time to gel in their first run together. The “Big Three” in Miami looked unbeatable on paper, and we all expected them to charge out of the gate with reckless abandon and take the league by storm. A few stumbles early on led to questions of fit and chemistry, and it took a while for Miami to round into form resembling a title favorite. But round into form they did—and the 2016-17 Warriors appear to be doing the same thing.

All of a sudden, the Warriors are 16-2 and the 70-plus win season that a lot of people were predicting appears to be back in play. At the time of this writing they’ve won 12 in a row since starting the season 0-1 and then reaching 4-2. They’re scoring 117.6 points per game (Cleveland is next best at 112), and averaging a league-best 12.7 point differential per game. They’ve become the fearsome product we all imagined in the offseason. What we didn’t really see coming is that they’ve done so somewhat quietly. Early disappointments shined a magnifying glass on the Heat back in that first season with the “Big Three” in Miami. This time around, the early returns for the Warriors seemed to cause most NBA fans and analysts to divert their attention elsewhere, focusing on the Clippers’ hot start, the Cavs’, or the absurd stats being put up by the likes of Russell Westbrook, Anthony Davis, and James Harden.

So how have the Warriors turned things around while we’ve been distracted by the general impressiveness of the 2016-17 NBA? We probably ought to start with the newcomer. Durant is no longer part of a dynamic duo as he was in Oklahoma City, but is instead a member of the “Big Four” in Golden State, and for that reason he commands a little bit less of the spotlight. However, there are statistical arguments to be made that he’s playing better than ever, posting a lower usage rate than we’re used to while keeping his stats in line with his career averages. In other words, the Warriors are getting the same Kevin Durant we’ve always known, but packaging him in more efficient fashion, allowing the rest of their stars to perform at or near the levels we’ve grown used to in recent seasons.

The biggest local star, Stephen Curry, probably isn’t in the midst of a third straight MVP campaign. The important thing for the Warriors is that this won’t matter. He’s settled into a rhythm that closely resembles his 2014-15 season (when he won MVP) more than his off-the-charts ridiculous 2015-16 effort, and that ought to terrify the rest of the league. If there’s any perception that Curry has dropped off, it’s founded in recency bias. No, he’s not doing what he did last year, but we quickly forget that he had a historically great season. He is still playing at a level near the one that allowed him to secure his first award as the league’s best player. Think of it this way: he’s averaging almost three points per game more than in 2014-15, shooting better from the field, shooting better from the line, and getting to the line more frequently.

Here’s another interesting way to think about the Durant-Curry duo so far. Statistics show that the average points per game of a top scorer for a Western Conference finals team is 24.4. And right now, both Durant and Curry are well over that mark, with Klay Thompson within striking distance at 20.7 points per game (though unlikely to get there). For the sake of clarity, most would probably look to Durant and Westbrook as a duo that would have accomplished something like this in recent years. And they did, in 2014-15. But the next leading scorer on that team was at 15.5 points per game.

Throw in the fact that Draymond Green leads the Warriors in rebounds, assists, steals, and blocks, and you get a grasp for how complete this team is looking. No one is being left behind, and the Warriors are looking more formidable by the night.

They’ll be the favorites we expected them to be.