You are here: Home / Football / What the College Football Playoff didn’t tell us 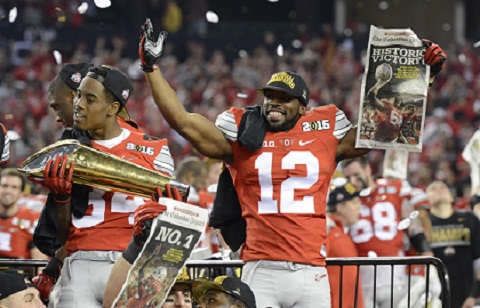 In the aftermath of Ohio State’s demolition of Oregon in yesterday’s College Football Playoff national championship, many people noted that if college football still employed the BCS, it is likely that neither of these teams would have been selected to play in the title game. Supposedly, the fact that Ohio State and Oregon played was a testament to the playoff system “getting it right” and correctly crowning Ohio State as the national champion.

You won’t find any argument from me about how good Ohio State is (third-string quarterback, bounced back from early-season loss to mediocre Virginia Tech team, etc.), or even how good Oregon is, despite yesterday’s lackluster showing. The Buckeyes are *probably* the best team in the country, given how they handled Alabama and Oregon. But just for kicks, let’s imagine that the BCS was still the system used to determine college football’s champion. Last night would have likely featured Alabama and Florida State in the title game.

If Florida State wins the game, you can already start to hear the #hottakes from talking heads about how the Seminoles are undoubtedly the best team in the country – after all, they would have been UNCONCQUERED at 14-0 (“all they do is win,” the pundit explains as he pounds his fist on the table for emphasis). If Alabama wins the game, the takes might be less hot, but you could also see lots of gushing about Nick Saban that would make you wonder why anyone bets against Alabama ever. To justify Ohio State being left out, they would have said something like “you can’t lose to Virginia Tech and expect to be in the championship game” or “they wouldn’t have won anyway with their third-string quarterback playing,” and most people probably would have bought those arguments.

What this hypothetical scenario tells you is that, at least for this year, people would’ve been convinced that the system got it right regardless of which system was used. If the BCS system was in place and Florida State or Alabama won the title, people would’ve been just as convinced of their status as champions as they are now with Ohio State’s.

Don’t get me wrong – I’m not trying to rain on Ohio State’s parade, as much as I would like to as a graduate of the University of Michigan. I’ve already conceded that in my estimation, Ohio State is probably this year’s best team. But what the CFP doesn’t tell us is who the best team actually is – it just assigns a champion (just like the BCS) and opens up opportunities for more teams to win the championship (not like the BCS). The best team might actually still be Alabama, Florida State, Oregon, or even someone else (hey TCU and Baylor!), and we might’ve been just as sure that they deserved the championship if any of them won it under a different system, not aware that our thought processes had been so distorted by the postseason system in place.

The College Football Playoff is probably a step in the right direction (i.e. more likely to include the best team without the bracket being too unwieldy), and hopefully we keep moving in that direction. Ohio State used the CFP to make a convincing case for being the best team in the country. But let’s admit that we would also have been thoroughly convinced by an Alabama or Florida State BCS title too.

A related aside: Some writers speculate as to what would have happened if the playoff was in effect for the past sixteen years instead of the BCS.

Dar-Wei wants Ohio State to be good because it makes the Michigan-OSU rivalry better, but now he’s scared that Ohio State is too good. Follow him on Twitter at @chendw.