You are here: Home / Basketball / Featured / Who takes J.R.? Can the Knicks move their disgruntled swingman? 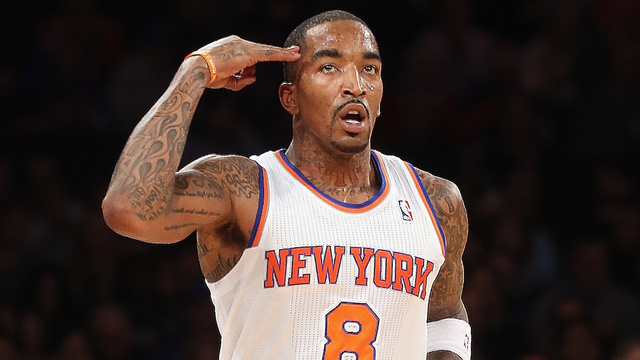 The New York Knicks are in the midst of turning around their season, or so they hope. But before the ship can be fully righted, they must figure out what to do with J.R. Smith who has suddenly fallen into the bitterly cold doghouse of coach Mike Woodson over the last few weeks.

It’s hard to believe that it was just a season ago when Smith was Woodson’s “favorite son” so to speak. Smith flourished in his first full season with the Knicks earning the Sixth Man of the Year award after posting career-highs in points and rebounds. But the 2013-14 campaign has been a far cry from last season’s success for both New York and Smith.

This season has mostly been a ride through the valley with only one or two peaks to speak of for the enigmatic swingman. From the mystery knee injury over the summer, the five game suspension for use of a banned substance to begin the season and now the fines for untying player’s shoes…it appears J.R. has worn out his welcome in the Big Apple.

Since the $50,000 fine for untying shoes, Coach Woodson has benched Smith twice in the last two weeks without notice each time. Rumors surfaced that New York would attempt to trade J.R. after the first benching but some Knicks insiders passed the benching off as Woodson trying to motivate Smith. Now after the second benching it appears things have truly come to a head with Smith saying “Communication from my end is over” following New York’s loss to the Charlotte Bobcats Jan.14.

He also said that if he wasn’t helping the team that there was no reason for him to be there. Well he may very well get his wish. His contract is eligible to be moved as of Jan. 15 so maybe the benching the night before was more of a contrived plan by the organization than they are willing to admit. But who would trade for a locker room disturbing, offensive-minded wing player owed approximately $12.4 million until 2016?

Let us speculate, because this is far from an easy scenario to decipher.

The Bucks have unintentionally been the worst team in the league with terrible numbers across the board.  They are 29th in points per game and could using the scoring acumen Smith provides. If the Bucks are willing to give up on the ever-disappointing Mayo then Smith could be acquired if the Knicks threw in  Cole Aldrich. The contracts for Mayo and Smith have the same length so neither team gets hurt there. The biggest issue with this deal is that Bucks are trying to develop their young players Khris Middelton and Giannis Antetokounmpo. Bringing on Smith complicates that vision and who knows how volatile he would be in a situation as dire as Milwaukee’s is.

No deal is suggested because there isn’t one that reasonable  fits under the guidelines of the salary cap. The teams would have to get creative to make something happen…maybe a third team? Charlotte wouldn’t mind getting rid of Ben Gordon but his contract actually dwarfs Smith’s. Acquiring Gordon for the Knicks would hurt mightily sending them further into the luxury tax oblivion but his deal expires this summer. The Bobcats are 28th in scoring, 25th in three point percentage and 29th in three point field goals made per game…all areas in which Smith could help. So maybe it’s something worth exploring as they try to make the playoffs this season.

The Hawks might be hesitant to give up any depth in the frontcourt with Al Horford out for the year, but losing Brand isn’t a season altering move. His meager production could easily be replaced by a D-league call up, although his veteran presence in the locker room might be missed. The Hawks have been surprisingly competitive with little production from the backcourt outside of Jeff Teague and Kyle Korver. Acquiring Smith would give them another play maker and the combination of he and Korver on the wing could be reminiscent of the Smith and Novak duo with the Knicks. Atlanta’s GM is not known as a risk taker and bringing on Smith’s personality for two and a half seasons doesn’t seem likely.

The Kings have forwards to spare with Carl Landry due back soon and Thompson would be a nice fit for the Knicks. Sacto is looking to put an exciting product on the floor and Smith would make the the Kings one of the most interesting teams in the league. It could also make them a ticking time bomb. The Kings want to develop Ben McLemore but he isn’t ready for prime time minutes just yet. They still have Marcus Thornton and Jimmer Fredette but Smith would be a modest upgrade over all of their wing players not named Rudy Gay.

The Nuggets would be trading one problem for another and  would be busting at the seams with perimeter players in deal for J.R. They would most likely have to make another deal to uncrowd that situation especially once Danilo Gallinari comes back from injury (assuming he does). Acquiring Smith would be a long shot and they could get more sensible offers for the veteran point guard Miller.  But if you are the Knicks, Miller would help the immensely and it doesn’t hurt to see if the Nuggets would at least take the call to explore options on a deal.

Not too many teams other than those listed could even entertain the idea of Smith. Maybe the Chicago Bulls who also have a need for offense, but they are committed to being sellers not buyers the rest of this year.

Smith has been erratic from the floor as evidenced by his shot chart. He regularly goes from “J.R. Swish” to “J.R. Brick” in the same game. 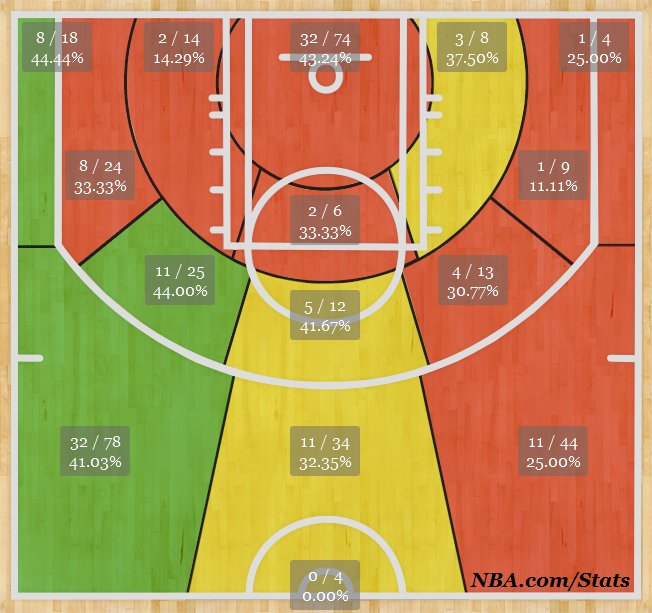 But when he’s hot he’s one of the best difficult shot-makers in the league. New York would love to get at least a second round pick for Smith, but most teams will be clinging tight to those knowing the Knicks aren’t in the driver’s seat in negotiations. Moving J.R. would help the Knicks give more time to Tim Hardaway Jr. and could do wonders for Smith if he winds up in any of the above mentioned situations (except Denver).

But if he stays he almost has to play so that circus doesn’t stay in town all season long in New York. They have enough problems as it is this season already.