You are here: Home / Basketball / Why the Atlanta Hawks should give John Jenkins a chance 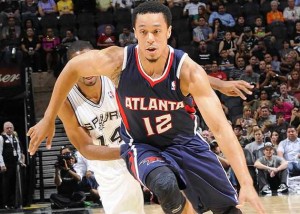 In 2012, shooting guard John Jenkins was selected in the first round by the Atlanta Hawks out of Vanderbilt. Then Hawks’ head coach Larry Drew wanted a team full of shooters but not much else. During his rookie season, Jenkins seemed to gel well with his teammates showing a nice shooting stroke. Defensively he isn’t much of a threat, paling in comparison to his draft buddy and second-round pick Mike Scott in the same year.

Danny Ferry and Mike Budenholzer are working on bringing the Spurs culture to Atlanta which is evident given their offseason moves. Jenkins showcased his keen ability to catch and shoot in his rookie season, which reminds me of a certain Spur. Shooting guard Danny Green has the exact same tools as Jenkins in his game–maybe even more defined because he’s been under Grep Popovich’s tutelage. Green was an impact player in San Antonio’s efforts to win their recent championship.

Many Hawks’ fans are quick to say “John Jenkins isn’t Danny Green” or “Jenkins is done” because he currently has a back injury. Ex-Atlanta guard Louis Williams got a whole season to prove what he could do, why can’t Jenkins? This year the fans got to see what the development staff can do when the team sticks together. If the Hawks training staff can get players such as DeMarre Carroll and Mike Scott to become better offensive players then they can do that with anyone.

Jenkins is eager to play with this team and should be respected for wanting to do so. Ferry’s plan is to acquire players that can develop and  it would work better if each player had the support from the fan base so they could do just that.

Cheer for whoever it is wearing those red and blue jerseys and you may get the result you want. Patience is a true virtue.