You are here: Home / Basketball / Will the New Lakers Head Coach be a Game Changer? 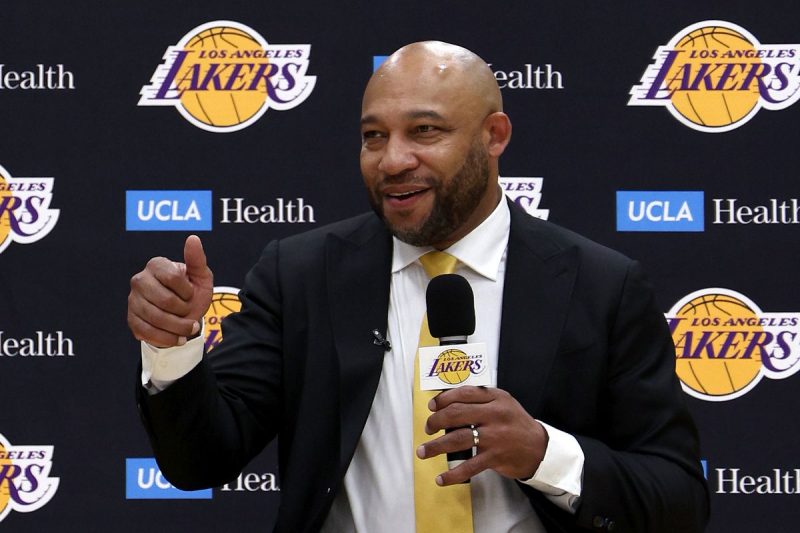 The National Basketball Association (NBA) is the top-tier league in North America and the most popular basketball competition in the world. Each year a new season starts, and 30 teams compete to win the championship and become the top team.

One of the most successful teams in the league’s history is the Los Angeles Lakers. They currently hold the most NBA titles, tied with the Boston Celtics. In this article, we look to see if the new head coach the Lakers have for the 2022-23 season could be the game changer they need to secure their 18th championship.

The basketball team was founded in 1947 and originally played in Minnesota as the Minneapolis Lakers. The team moved to Los Angeles and rebranded as the L.A. Lakers in 1960. Over the years, the team has sealed many records, including the longest winning streak in NBA history, winning 33 consecutive games during the 1972 season.

The Lakers have had many star players during their history, including Abdul-Jabbar, Magic Johnson, Kobe Bryant, and Shaquille O’Neal. They have won multiple MVP awards and helped make the Lakers one of the strongest names in the league. In terms of success, LA are currently tied with the Boston Celtics for the most championship titles, and both sides have won 17 NBA championships.

The 2022-23 season is the 77th in NBA history and will commence on the 19th of October 2022, with games played until April 2023. These games are one of the leading sports to bet on. This year, the betting odds for the Lakers to win the 2023 championship opened at 22-1, but have slowly lowered to 14-1, as more fans place futures bets on the season winner.

Online bets are excellent for entertainment, and people interested in extra action can find a list of bonuses by Nodepositdaddy.com . They feature many no deposit casino bonuses and promotions with fantastic value, so we recommend checking them out.

This year the team has signed a new head coach, Darvin Ham. Ham has had an illustrious career, including being an assistant coach at the Lakers in 2012 and 2013. He played college ball with Texas Tech University, before making his entrance to coaching beginning in the NBA D League. Since then, he’s worked hard and managed to coach various teams in North America, and brings a lot of experience that the Lakers can benefit from.

Overall, Darvin spent eight seasons playing for various NBA teams as a reserve. He played with Atlanta, Detroit, Denver, Milwaukee, Washington, and Indiana. His highlight as an NBA player was being part of the Detroit Pistons team that won the 2004 championship. In 2013 he was part of the Atlanta Hawks coach team, helping them make the playoffs four ​ seasons in a row. Later, he moved to Milwaukee in 2018, helping coach the team to the NBA title in 2021.

Over the last few years, the team has been changing management around , and signing a reputable coach like Darvin Ham, may be exactly what the team needs for a more successful season in 2022-23.

Last season, the Lakers performance was average, and they finished in 11th position in the NBA Western Conference for 2022 with 33 wins and 49 losses. This is far from their target of dominating the league, and the team will have to work hard to ensure a better 2022-23 season.

The team’s star player, Lebron James, didn’t fail to amaze fans, as he led the attack and ranked 1st for points with an average of 30.3 per game. He was ranked as the second highest point scorer last season, just behind 76er’s Joel Embiid with 30.6 points. Other players with great performance last season are Anthony Davis with 23.2 average points, and Russell Westbrook with 18.5 points per game.

The Lakers have a few notable new signings this year, including Scotty Pippen Jr from Vanderbilt. He is the son of the famous Chicago Bulls player who made the hall of fame. They’ve also signed Cole Swyder from Syracuse on a new contract.

These youngsters will be energetic additions to the team, and out to prove themselves to the team and fans. When combined with the experience of Anthony Davis, Russell Westbrook, and Lebron James, their team could prove a tough challenge for many of their opponents.

Recently rumors have surfaced about the Utah Jazz’s plan to acquire star Laker player Russell Westbrook in a trade deal . If he did leave the team, that could affect how well the team performs going forward.

Can They Win This Season?

The 2021-22 NBA season wasn’t a successful campaign for the Lakers, who lost more games than they won. At the end, their record was 33 wins and 49 losses. With the addition of the new head coach, a few new young signings, and the strength of the current team, the Lakers will be in a better position to go further in the playoffs.

In 2022, the team started their NBA Summer campaign, and are off to a decent start. They won five of their last eight games, including a 23-point win over Golden State, and dominating the Miami Heat in a 33-point victory. If we look at their recent performance and statistics, it appears the Lakers have their eyes on the prize this season, and the team is working well together under the new coach.

Darvin Ham is officially the 28th head coach for the Lakers team, and has a big task in organizing and training the team for the 2023 season. If the chemistry between coach and players develops well, then maybe under Darvin’s leadership, the team can win their next title.