You are here: Home / Hockey / Winnipeg at Minnesota: The New Rivalry Begins 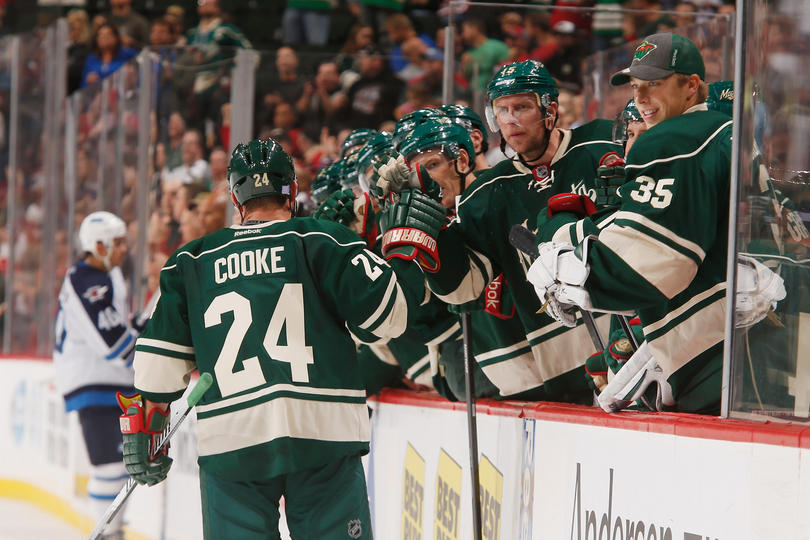 Last night marked the first time the Winnipeg Jets traveled just over 300 miles to the south to take on the team that is now closest to them in their new division, the Minnesota Wild. Devin Setoguchi, who was a key addition to the Jets in the offseason, has not disappointed; scoring 2 goals and tallying an assist to start the season. That being said, he was a complete non-factor in this one.

In the first period, Jonas Brodin of the Wild opened the scoring as a hard rebound off of Ondrej Pavelec from a Matt Cooke slap shot bounced off of his hand as he whiffed on the shot. The puck deflected up and forwards, almost hitting him in the face, before knuckling into the net.

Looking back on that early goal it seems like a metaphor for the game; sloppy.

The Jets did manage to scare the home crowd after killing the first of 2 penalties in a 5-0n-3 in favor of the Wild. Mark Stuart grabbed a loose puck near the penalty box and streaked in for a clean shot but was denied. The Wild managed to maintain possession and missed on 2 more opportunities as if they are so surprised they were open that they weren’t ready to shoot.

It catches up with them when the Jets score on their first PP with 1:29 left on a deflection from Bryan Little but that would be the only goal for the artists formerly known as the Atlanta Thrashers.

Matt Cooke would score the eventual game-winner at the 10:30 mark of the 2nd period when Pavelec couldn’t smother the puck. Cooke jabbed his stick under his left pad a split-second prior to the referee blowing the whistle.

The main thing to take away from the performance is that the box score will tell the story as to how the game went but I’m not convinced that the second goal should have counted and here is why:

When Cooke came skating in for the puck the referee in the back of the play behind the net had his whistle to his mouth and was skating almost the same rate towards the net. Just as Cooke went for the puck and hit it with his stick there was a whistle. I don’t have access to DVR at the moment so I challenge anyone out there on the internet that happens to have that game in their DVR for some reason to go back and watch that goal and listen closely. Watch Cooke’s stick, listen for the whistle, and watch the puck go in the net, the light come on, and the crowd go insane.

Call me crazy, but I’m pretty sure that’s how I saw it. I made note of it instantly and thought surely they would review it but they never did, they just went about the game and the Wild went on to win in regulation.