You are here: Home / Basketball / Featured / Would the Philadelphia 76ers be right to sit Nerlens Noel for the season? 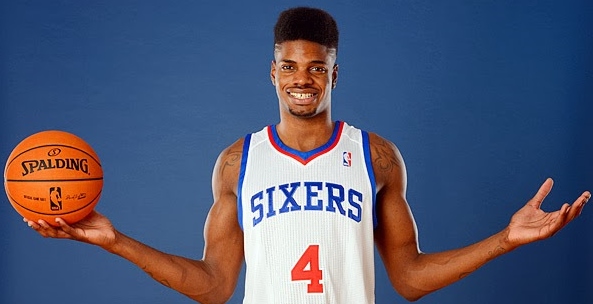 It appears the rookie debut of Philadelphia 76ers’ big man Nerlens Noel may not come until the 2014-2015 season according to multiple reports.

“I doubt, everybody doubts that he’s going to play this year,” Brown said before the Sixers played the Cleveland Cavaliers on Monday. “We don’t want to waste this year. I think from a skill perspective, it’s an opportunity for us to break down his shot, really work on his free throws and start a little bit from ground zero.”

The question here is whether or not Philly is doing this for Noel’s own good or to continue the tanking mentality everybody seems to think they have adopted for this season. The answer really is a little bit of both…and for good reason.

By most expert accounts Noel is a project big man. He is sushi raw on offense and lacks the footwork to operate in the post effectively and is also missing the necessary structure needed on his jumper to be reliable from any distance. Taking a year to fully recover from his ACL injury and work on some semblance of an offensive game might be a smart move. Of course Noel himself wants to play and show the five teams that passed on him that they made a mistake…but there will be plenty of time for that down the road.

On the other hand, the 76ers ensure their defense will be suspect by keeping Noel out for the season but can use a very valid guise of “development” for the rookie. In a season where NBA teams are valuing their potential ping pong balls more than ever in preparation for the lottery, no team is more equipped to be bad than the 76ers. If their plan works they could be pairing Noel with the likes of Andrew Wiggins or Jabari Parker next season.

The catch is that Wiggins or Parker could still be in their future even if Noel plays this year. His talent isn’t’ franchise changing enough to make Philadelphia a playoff contender in the East at all so it’s almost a moot point.

Still an official decision has yet to be made and Noel could very well play this season. Noel’s agent, Andy Miller, surely doesn’t think his client’s rookie year is in jeopardy just yet according to HoopsWorld.com:

“There have been no decisions made at this time. He has been doing his rehab vigorously.” – Noel’s agent Andy Miller

One could easily argue that when he is fully recovered that he needs to start playing against NBA level talent immediately to truly develop. We have no choice but to wait and see in this situation but where there is smoke there is fire and this is the ultimate “to be continued” scenario for the 76ers.